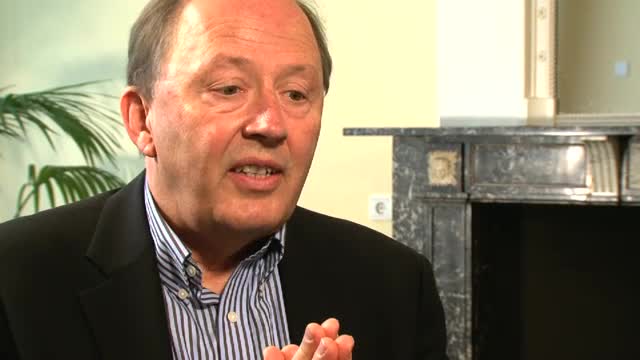 Agriculture is phenomenally important. We have seven billion people. We're heading towards nine, maybe ten billion people. And even more than that, as people become richer, which they are around the world - and I think it's a wonderful thing to have the quality of life, which tends to correlate to some extent with what they can earn, go up for people around the world - they demand a lot more food. More than a billion people have massively substandard diets which keeps them from being able to live a full life and develop their potential. Another billion people have substandard diets which basically make them constantly hungry and so on and interferes. We have to provide those people with an equitable supply of food if we want the world to be stable. We know that low food leads to conflict, to rebellion and so on. We've seen it in some nations recently around the world. It's really our moral obligation as well as frankly a wise thing for us to do to have a better and more equitable food supply around the world.

There are ways we can do that that are much better than what we are doing right now. It's going to be unavoidable that we're going to have to have intensive agricultural practices, but there are ways they can remain intensive and high-yielding to have lower yields. For instance, in the European Union in the early 1990s a rule was passed that restricted the amount of nitrogen fertiliser that could be applied to crops. Frankly, Europe and the United States and Japan and other richer countries were overapplying fertilisers, applying it at a rate where the yield goes up like this and then it levels off. Then there's a slight bit of an increase here and you add a bit more nitrogen and the farmers are way out over here, when they could have had a little bit less and gotten almost the same yield. And so that sort of pushed in that direction. But other technology keeps increasing in agriculture. In Europe what happened was yields were going up as the Europeans added more and more nitrogen. Then suddenly around 1995 or so, yields kept going up but they applied less and less nitrogen. The yields are now about 25 percent higher than they were when the nitrogen rules came into effect and the nitrogen use is about 20 percent lower. We're going to have to help the really poor nations in the world right now, who have a lot of land that has been cleared, land that if it keeps being farmed the way it is, gives yields that are one fifth and even one tenth of what they could be. We're going to have to help them become more productive and to adopt the wisest part of our modern agricultural practices, because those yields could be up almost at what they are in Europe and the United States without having massive overuse of fertiliser and so on.
The thing is if we don't do that, to feed nine billion people the diets they're going to demand when they become richer we're going to have to cut down and destroy the vast majority of the reserves of biological diversity around the world. We're going to need about a billion more hectares of land. That's a land mass the size of the United States plus Western Europe combined. That amount of land cleared around the world and land left to be cleared that's good for agriculture, is rain forests in the tropics and savannahs in the tropics. This is the massive reservoir of the earth's biological diversity and if we don't find a more efficient and environmentally better way to feed the people of the world, they will have to clear that land on their own to feed themselves. There are ways. When you've looked at the numbers, there are ways that we can have a wise increase in intensification of agriculture, not the level that we practised it, that really gives us sort of an optimal solution. The people in the poor nations of the world can feed themselves and they will actually have extra food to export to start a viable economy in their own nations. To export to China, to India, to Malaysia and other countries which are growing so quickly they won't be able to feed themselves in the long term. And in doing so they could do it in a way, if we can help them understand the wisdom of this and adopt the wisdom ourselves, which we have to do, that they can give us a world fifty years from now in which we have the same amount of land and natures we have right now. We might even be able to restore some extra land back into nature and we can have an equitable supply of food around the world.

The Football Association: Respect the Technology

The World Of CGI Graphic Is Improving!

The Stuff That Dreams Are Made Of